Flemish And North French Dunes Restoration is a joint nature restoration project of the Agency for nature and forests of the Flemish Government, the Conservatoire de l’Espace Littoral et des Rivages lacustres and the Département du Nord for the coastal dunes between Dunkerque (France) and Westende (Belgium), that is co-financed by the European Union.

Memorandum of Understanding : climax of the LIFE project FLANDRE and start of a lasting cooperation
On Friday 14 February 2020, on the Franco-Belgian border between Adinkerke and Ghyvelde, the memorandum of understanding for the protection and management of the cross-border dune belts between Dunkirk (France) and Westende (Belgium) was signed by the representatives of the Agency for Nature and Forest of the Flemish Government, the French State, the Conservatoire du Littoral and the Département du Nord, in the presence of more than 50 spectators. The LIFE+Nature project FLANDRE ends on 1 March 2020, but the signing of the memorandum ensures the continuation and consolidation of the cooperation between the 4 partners mentioned above with the ultimate aim of improving nature and the experience of nature in a single cross-border European protected nature park.

In the future, the partnership could be extended to include even more interested public authorities. 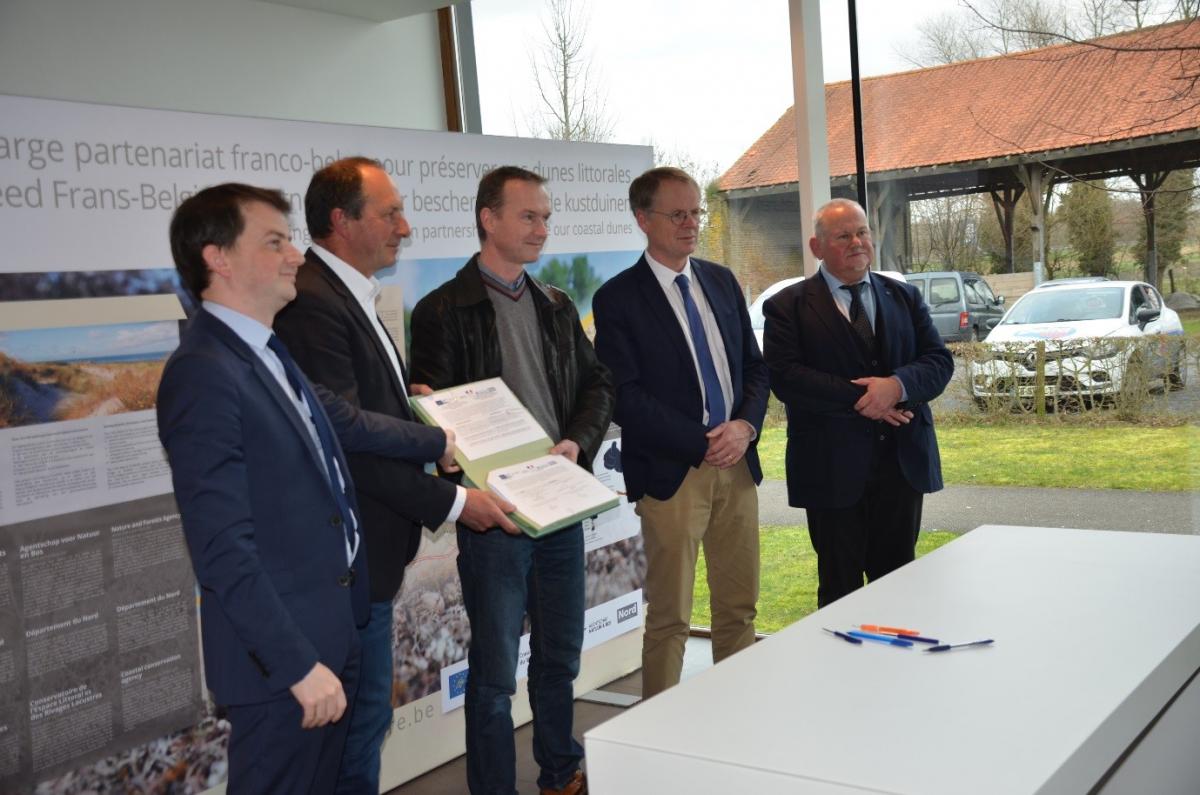 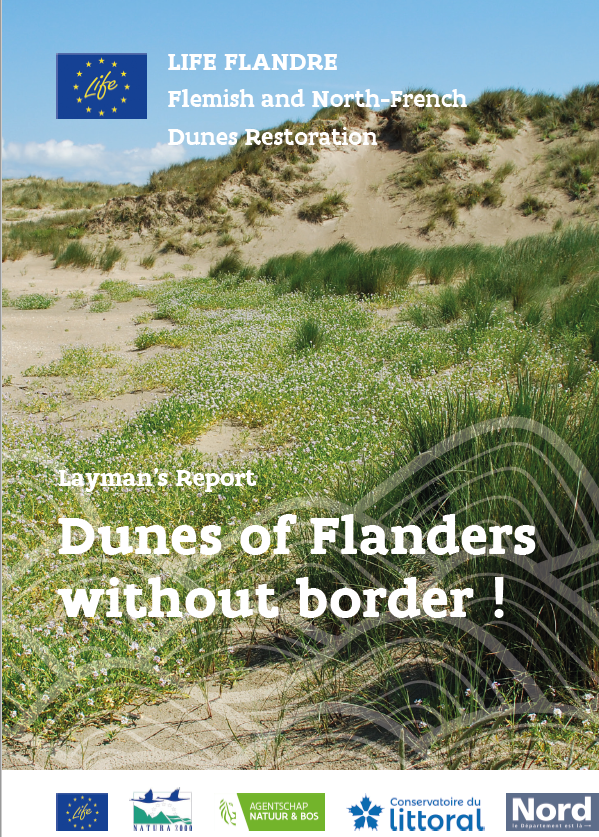 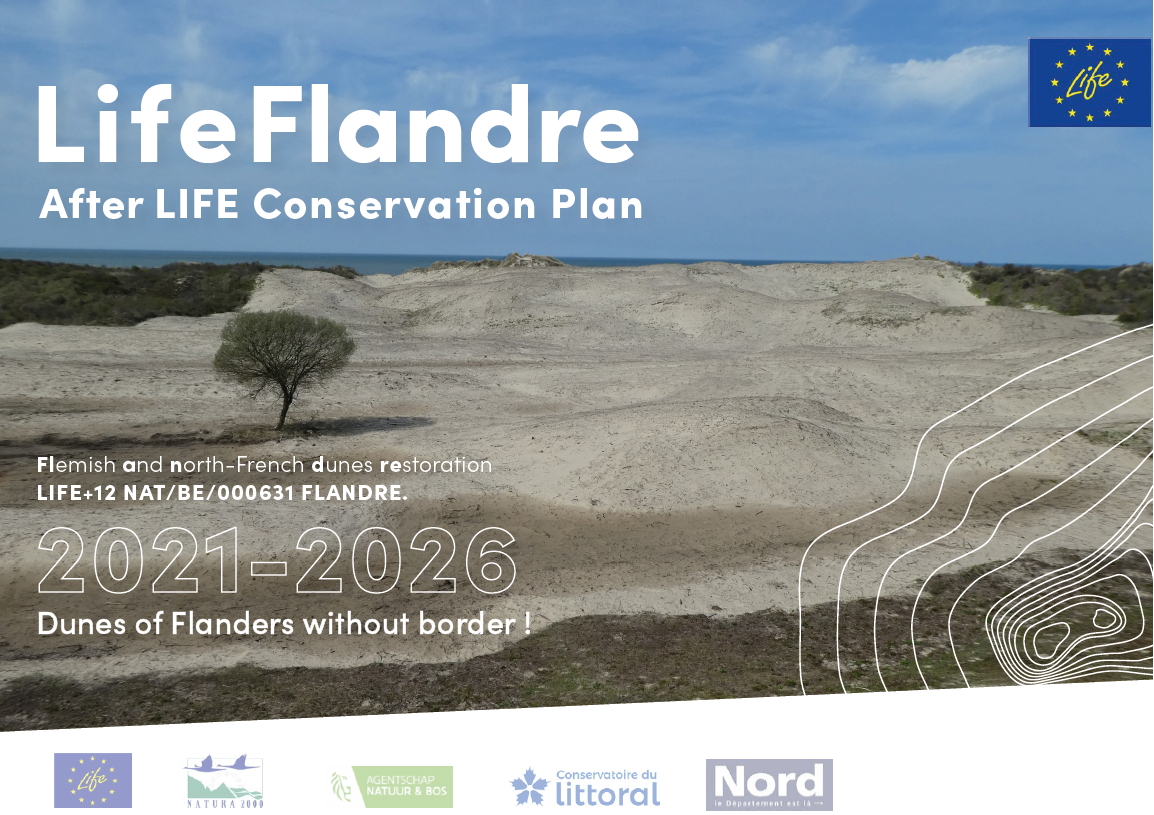 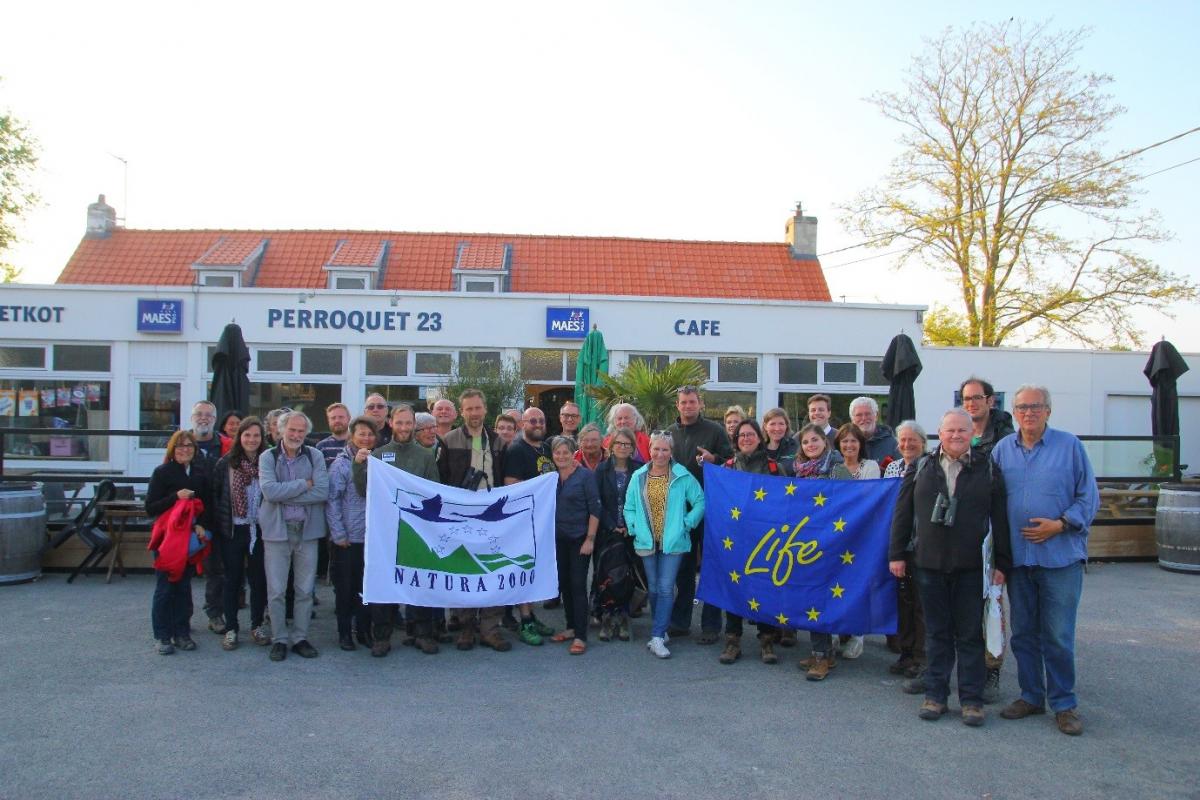 Photo Reinhardt Strubbe: the group of participants at the departure of the guided walk from the Café Perroquet 23.

Some 45 enthusiastic Belgian and French participants took part in the cross-border visit to the "fossil dunes" of Adinkerke and Ghyvelde that was organised by the LIFE+ FLANDRE partnership on 21 May 2019 as contribution to the European Natura 2000 & Life Day. During the excursion among others blossoming Early Marsh orchid, calling Natterjack toads, Partridge, Lapwing, Stonechat (LIFE+ FLANDRE mascot!), Meadow pipit, Nightingale, Marsh harrier, Long-eared Owl, Red Wood Ant and Nathusius’ Pipistrelle were observed ! 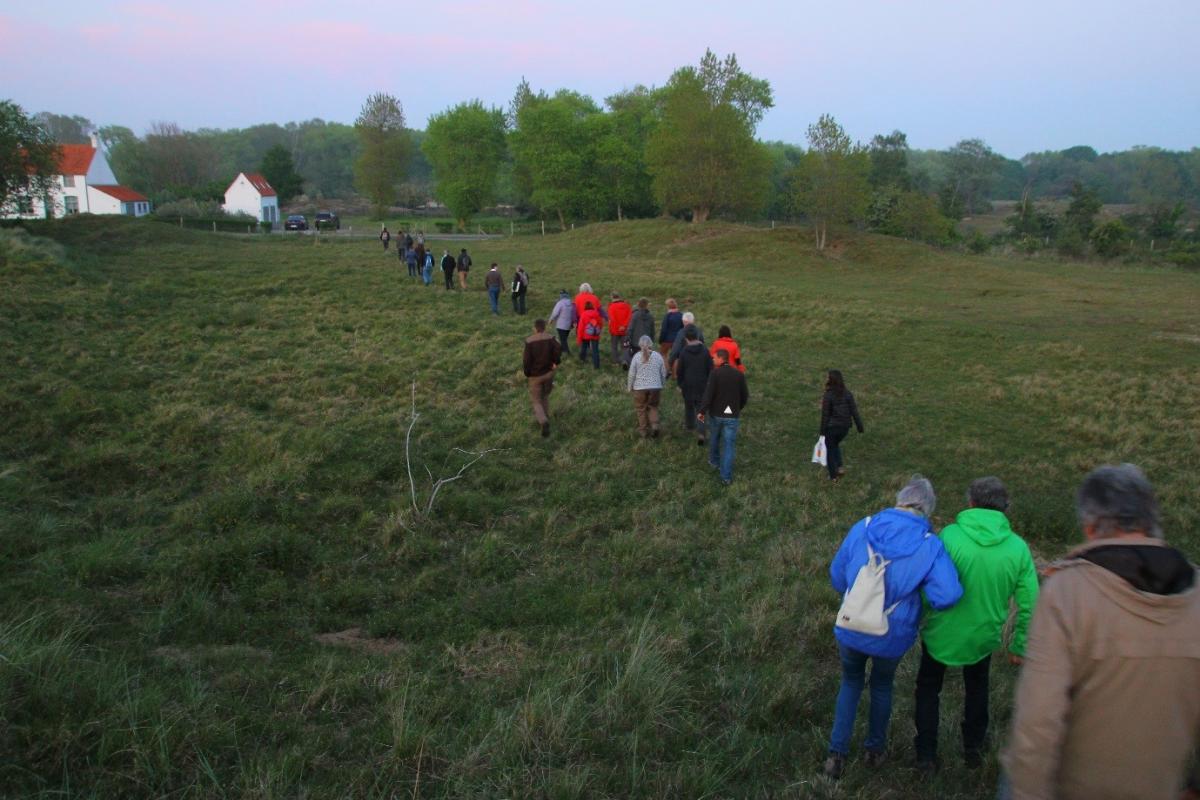 Photo Reinhardt Strubbe: The column of participants walking from the Dune fossile de Ghyvelde (France) to the Domain Cabour in Adinkerke (Belgium).

International workshop “coastal dunes and sandy beaches – Dunkirk 2018”
On 12, 13 and 14 June 2018, 143 dune experts from 13 European countries gathered at the premises of the Université du Littoral - Côte d'Opale (ULCO, Dunkirk, France) to examine the measures needed to protect and restore biodiversity and the natural processes of coastal dunes and sandy beaches. This workshop was organised by the three partners of the LIFE+ Nature “FLANDRE” project in collaboration with the ULCO - Laboratoire d’Océanologie et de Géosciences. You will find the book of abstracts, the excursions guide, the report of the sessions and excursions, all the presentations and finally the press release with the conclusions of the workshop through the following link: https://www.bosplus.be/nl/lifeflandre. 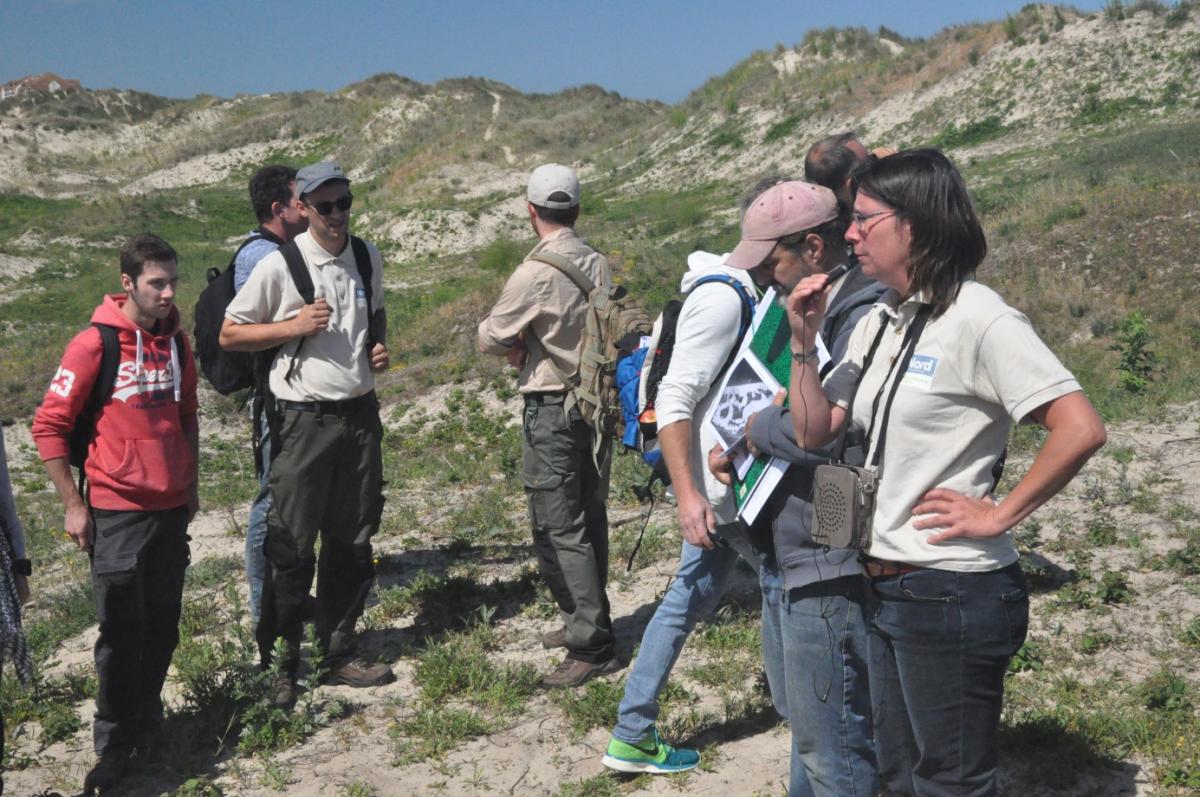 Sixth meeting of the Advisory Committee
In November 2013 46 (27 French and 19 Belgian) representatives of concerned public authorities, scientific institutes, and non-governmental conservation organisations were invited to join the advisory committee of the LIFE+12 Nature project ‘FLANDRE’. 44 (27 French and 17 Belgian) persons accepted to join the committee. The first meeting of that advisory committee took place on the 7th May 2014 at Zuydcoote (France), the second on the 11th December 2015 at Koksijde (Belgium), the third on the 9th November 2016 as well as the fourth on the 13th of December 2017 at Zuydcoote again, and the fifth on 12th December 2018 at De Panne (Belgium). On the 29 January 2020, the Advisory Committee of the LIFE+ Nature project FLANDRE met for the 6th time, this time in Bray-Dunes (France). During the morning, the final reports of the studies "Masterplan" (action A1&2), "Impact of the project on the local economy and ecosystem services" (action D1&2), monitoring of the effects of the concrete habitat restoration measures in the French dune domains on the vegetation (D4-D5), the populations of Close-crested Snail (D6) and Crested newt (D7) were explained by the mandate-holders to the 28 members of the Advisory Committee present. The overall final state of progress of the project was also presented and approved. In the afternoon, under direction of Bénédicte Lemaire (Département du Nord) and Gwénaële Melenec (Conservatoire du Littoral), site visits were made to respectively the "Dune du Perroquet" (where among other things thickets were removed) and to one of the most recent land purchases by the Conservatoire du Littoral, a 2.9 ha domain in the southern dune-polder transition zone of the "Dune fossile de Ghyvelde", where an empty house will be demolished for the purpose of restoring nature. After the completion of the LIFE+ Nature project FLANDRE on 1 March 2020, the work of the Advisory Committee will continue in implementation of the Memorandum of Understanding signed on 14 February 2020. 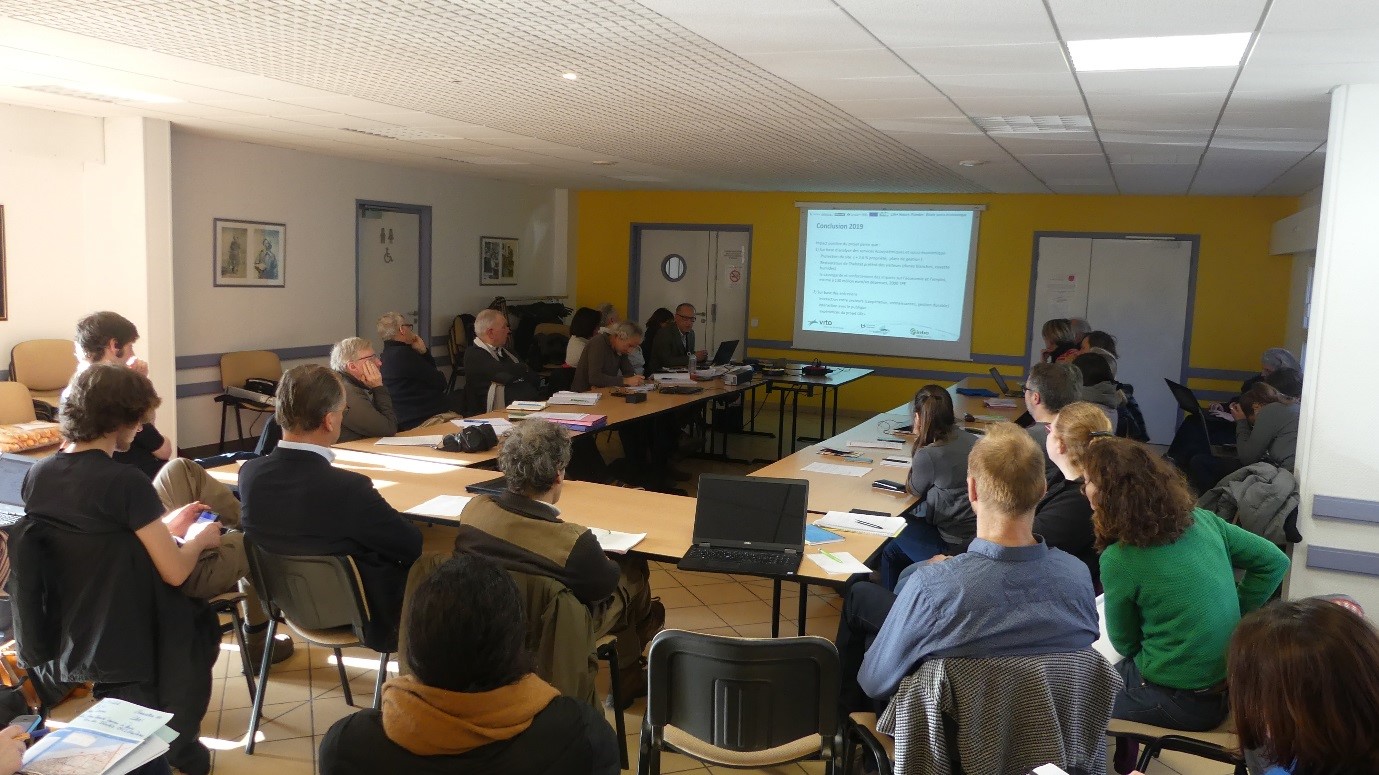 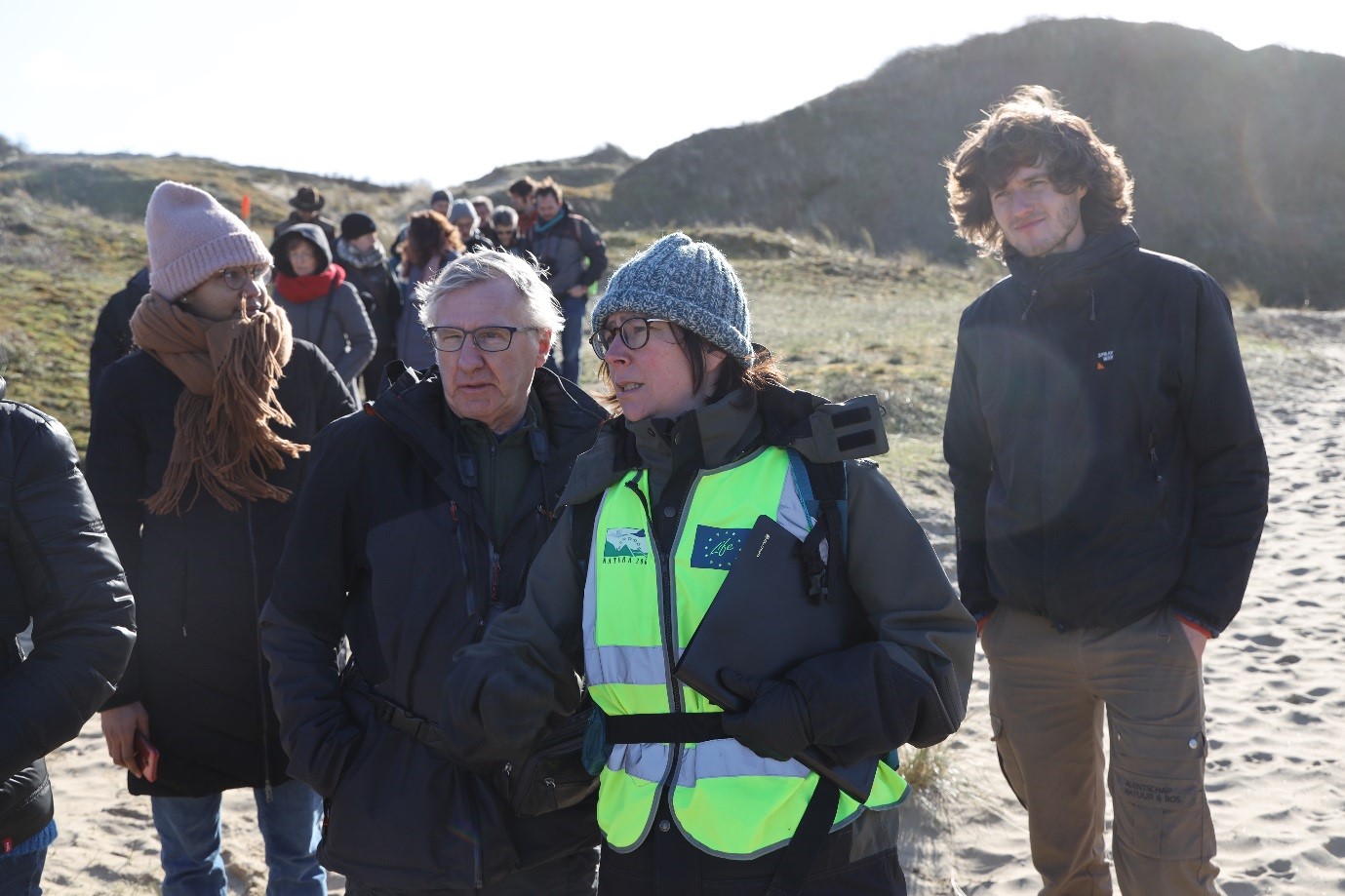 
With support of the financial instrument LIFE+ of the European Community
LIFE is the EU’s financial instrument supporting environmental, conservation and climate action projects throughout the EU. The general objective of LIFE is to contribute to the implementation, updating and development of the EU environmental and climate policy and legislation by co-financing projects with European added value. Since 1992 LIFE has co-financed some 4.171 projects, contributing approximately 3.4 billion euros to the protection of the environment and climate.